Today the prompt was radio. I really need to sped more time on these sketches. This was obviously rushed. 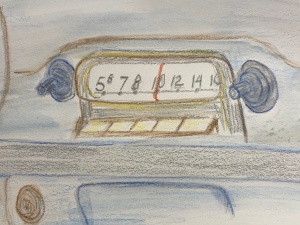 You know what happens when there are no rules? People run amuck doing whatever they please. Jim certainly let the chickens out of the hen house today! And I am shattering any idea of rules!

I decided today would be a good day to introduce you to my family through music. When I think about them I tried to focus on what song rises to the top in my memories.

Dad was a big man with a deep bass voice. He was a bit of a scoundrel in his early days but he was my best friend, my confidant, my biggest cheerleader. We took a lot of road trips and singing was always a way to pass the time. On long trips everyone would fall asleep except Dad and I. Behind the drivers seat I sat and would rub his shoulders to keep him awake as he drove into the night. This is when he would start singing the spiritual and hymn “Steal Away”. I looked hard to find an arrangement that sounded the most like Dad. This one by McHenry Boatright comes the closest.

Mom always shared her music with me. This is where I learned about Glenn Miller, Ned Miller, and Vaughn Monroe among others. “Racing With the Moon” was Vaughn Monroe’s signature song, highlighting his wonderful baritone voice. Hearing this song makes me think Mom is just in the next room listening to the record player.

Picking a song that reminded me of my sister, BJ, was difficult. She loved all the oldies from her generation. It came down to deciding between Elvis and Ricky Nelson. “Travelin’ Man” won out simply because I can see her popping the 45 on the record player and singing along. Remember watching Ozzie and Harriet and hoping there would be time for Ricky to sing at the end of the show?

My sister Rosie was a huge Paul Revere and the Raiders fan. She attended a Christian college in Tennessee and spent a great deal of time in Cherokee, NC. The outdoor play “Unto These Hills” depicts the pain and suffering that was a result of the Indian Removal Act of 1830, resulting in what is now known  as “The Trail of Tears”. She fought tirelessly for Native American rights. This song is one that always makes me think of her even though it contains some inaccuracies which seem to plague American history.

My brother is another story altogether. For him it was between The Beatles, The Left Banke, and Every Mother’s Son. I pondered “Get Back”, “Pretty Ballerina”, and “Come On Down to My Boat”. He drove me nuts with the first two putting the 45s on and playing them with the arm off. So, the winner today is Every Mother’s Son.

Why not join in on this Sunday blogging ritual. Head over to  Jim Adams blog to check out the rules and read some of the great responses to the weekly prompt.