I maybe crazy for trying to undertake this challenge for July, but since it appears we will be safer at home until who knows when, it might be good. Let me just say, I am not a film aficionado by any stretch of the imagination. I am an avid repeat watcher, going back to films I enjoy rather than some of the newer films. So many I have seen of late have been a disappointment. I would make a horrible movie critic.

So, the Day 1 challenge is the first film you saw at the cinema. Let’s climb in the time machine and travel back to approximately 1960 or 1961. We lived in a rural environment and the closest movie house was about a 30 minute drive away at a time when many households did not have cars. But this afternoon was different. We were all loaded up in the car along with the grandson of a man who came and camped for weeks during the summer —  I do not remember his name but I do remember his laugh. The movie theatre would roar with it.

The movie was Disney’s “Swiss Family Robinson”. The film was based on the novel The Swiss Family Robinson, by Swiss author Johann David Wyss. Originally published in German in 1812, it was translated to English two years later. An earlier  film based on the book was released in 1940 by RKO pictures. Disney’s version was filmed almost entirely on the Island of Tobago. At the request of the local Tobago people, the treehouse built for the film was left intact after filming but was eventually destroyed by a hurricane. The tree still stands.

The movie was a great, but might be offensive to some of today’s sensibilities regarding  animal rights, women’s rights and conservation concerns. All the animals had to be brought to the island as none of them existed there. At my young age I just remember it being fun. One of the memories that linger most from my first indoor movie is how bright it seemed outside after sitting in a darkened theater for so long!

I decided to take on this challenge for July after reading about it from SandmanJazz. Check out his blog and his entry for the first day of the challenge. Maybe even join the challenge! 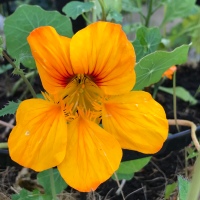