I remember chuckling because my mother-in-law stayed so busy when she retired. Now I get it. We finally get to stay busy doing what we want!

I finally got around to taking some photos of the jewelry I’ve been making. These are some of the photos from David and Molly’s Silveramics ®️ Workshop. (Design concepts by David and Molly.)  I hear there are still openings for their February class in Mexico! 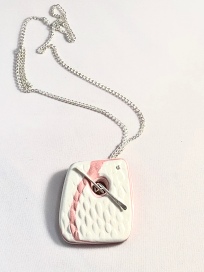 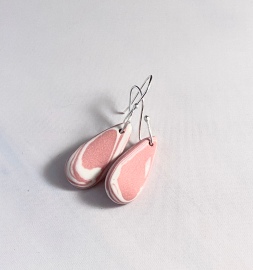 The focal points of the jewelry pieces are made from blended colors of porcelain clay. It was such a great workshop and now that I know more what to expect, I have more ideas! 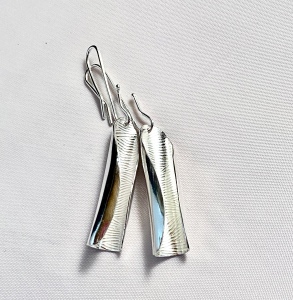 I also finally got around to polishing the last pair of earrings I made. These are my own design. Sterling silver with a textured interior. This is the thing. I worked hard to make these. Afterward, I learned a much easier way to make the curve. So, I live and learn! The next time, it will go much faster.

This afternoon we are going to help my grandson celebrate his 18th birthday. I cannot believe how fast this time has flown.

This post is part of Linda Hill’s Just Jot It January writing inspiration. Today’s inspiration word was given to us by Saumya.

Jim Adams does not realize he selected the impossible task for me this morning. He chose duets as the subject. I knew picking one duet was not going to be possible for me. Duets (especially when there is harmony involved) may very well be my ultimate choice in music.

I began to think of ways I could slyly pick more than one song. I thought since the subject is duets, I could choose a duet of duets. But even that would not do. So here I am to bring you Maggie’s Duet Awards (think of the Grammys without famous people or fancy gowns). The results have been hermetically sealed. Then envelope please…

I grew up with this classic song and wore out the entire Everly Brothers greatest hits album.

My Rifle, My Pony and Me ( Rio Bravo)
Written by Dimitri Tiomkin and Paul Francis Webster
Sung by Dean Martin and Ricky Nelson

I grew up watching John Wayne movies. My mother loved westerns and war movies. When I married my husband, I found out he was a John Wayne fan, too. This movie is a classic.

When my children entered high school, they learned to harmonize. The first time I heard them sing this along with the radio, I turned the radio off and asked them to sing it again. They tired very quickly of me asking them to sing this song for me every chance I got.

Heavenly voices for sure. I can only imagine having this kind of vocal talent. As my mom always used to say “I can’t carry a tune in a bucket with a lid on it”.

One of my absolute favorite country songs. It takes me back to the precious time in my life when I would sit and listen to my grandparents’ stories for hours on end.

Best Duet in a Broadway Production

“Into The Woods” is a Broadway play that depicts what happens in the woods when all the fairytales crash together. This scene is two of The Princes arguing about who has the craziest maiden.

Both amazing talents gone too soon. These lyrics and this performance reflect the best of the Motown era. What a loss they were to the music world and to the world in general.

This post has been an abuse of power (even though I have none). For the sake of potential readers, I did not add history and lyrics for each song. Thank you Jim Adams for this Sunday Lift and I hope you will forgive me for going overboard this week. I could go on and on (and perhaps I did).