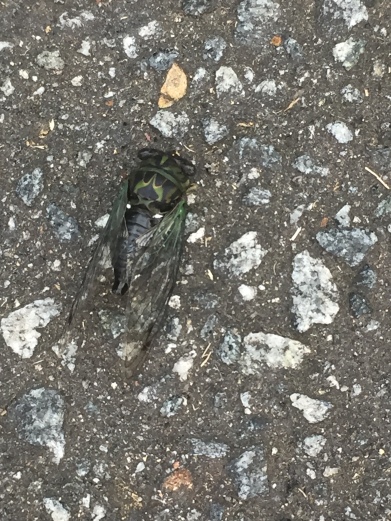 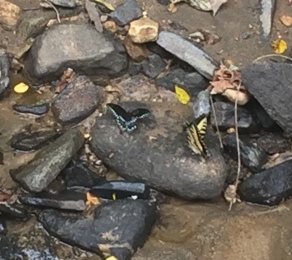 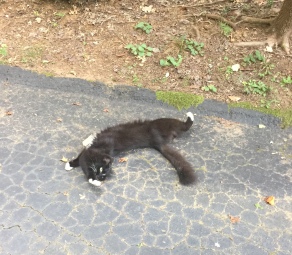 Ha! I jest, of course, but last night was a rough one. I am always reminded why children are generally blessed to the young. It also reminds me to give a shout-out to all the grandparents who step up to raise their grandchildren when their own parents cannot or will not. I do not know how you do it day-in and day-out.

We actually had a really good day. We walked several times at the request of the little ones. We made some discoveries and the neighbor’s cat came for a visit. They were thrilled to be able to pet him and he was thrilled for the affection.

We managed to give them some time away from each other throughout the day which they desperately need from time to time.

My granddaughter and I made meatloaf for dinner and everyone ate well. We popped some popcorn and watched “Legend of the Guardians: The Owls of Ga’Hoole”. Neither of them had seen it but they seemed to enjoy it. I had checked with their dad beforehand and he said they were allowed to watch PG movies. I do not try to parent, just adhere to the rules.

They had some fruit for a snack, then showers and Part III of “Diamond Eyes” before settling into bed. They fell asleep right away. We were home free or so I thought.

About 2:00 AM I woke to my granddaughter wide awake, with the nightlight candle right beside her. I asked what was wrong and she said she could not sleep. I got her settled back and fell asleep. Until 3:00 AM when I heard someone crying.

My grandson was sitting up crying because his sister had pushed him and banged his knee into the dresser. After a quick reminder we do not push or shove each other, I got them resettled and I went downstairs for some water. When I came back, the oldest was in the easy chair with her blanket and pillow so I just let her be.

At 4:45 AM my cell phone went off with my granddaughter’s ringtone. I sat up and looked around the room and she was not there. I bolted out of bed frightened and found her standing inside the guest room door. She had decided to go there to sleep and was texting me to tell me where she was so I would not worry about her. My heart was pounding and I think I startled her in my panic.

So, grandma settled into the guest room with her where she finally went to sleep. I was having fitful crazy dreams by this time. Of course then my daughter called on her way to work at 8:15 A.M. so I got up and made some coffee. It was a night of broken sleep and craziness at grandma’s house!

Yesterday was also our youngest granddaughter’s 2nd birthday. We video chatted with her to say happy birthday. She seemed to have a good birthday and loved the Frozen Card we sent which plays “Let it Go”. She enjoyed playing it over and over and singing at the top of her lungs.

My two grandchildren with us are such a parallel to their dad and his sister. They have the same number of years between them and the oldest is a girl with a little brother that thinks the world of her. Unfortunately, that manifests itself in him hanging on her and hugging her endlessly which she find extremely annoying. They remind me so much of my children as they grew up so their arguments and frustrations are very familiar to me.

My granddaughter is also a deep thinker. She ponders things and questions things and her mind will toss them around for hours. It makes my heart ache, because that was me as a child. I thought about things that most children never gave a second thought about and it opens a place of deep feeling and vulnerability. I hope she has a tougher exterior than I did.

Today will be another day and the only one without rest will most likely be me. We may try to venture to the gem mines and let them have some fun at the sluice table. The buckets are salted which means they plant gems in the buckets so everyone finds something. Nothing like getting your hands dirty to make a kid happy.

The week is ticking by quickly.